despite the uncertainty caused by the pandemic, athletes around the world trained at home, dreaming of gold. Finally, they head to Tokyo.

After an unprecedented delay due to the coronavirus pandemic, the Tokyo Olympics will take place from July 23 to August 8. Legendary American swimmer Katie Ledecky and goat gymnast Simone Biles are expected to break barriers and records; new events like skateboarding, sport climbing, karate and surfing promise to attract a younger crowd from around the world. In short: it’s going to be a historic year.

These are just a few athletes worth watching. 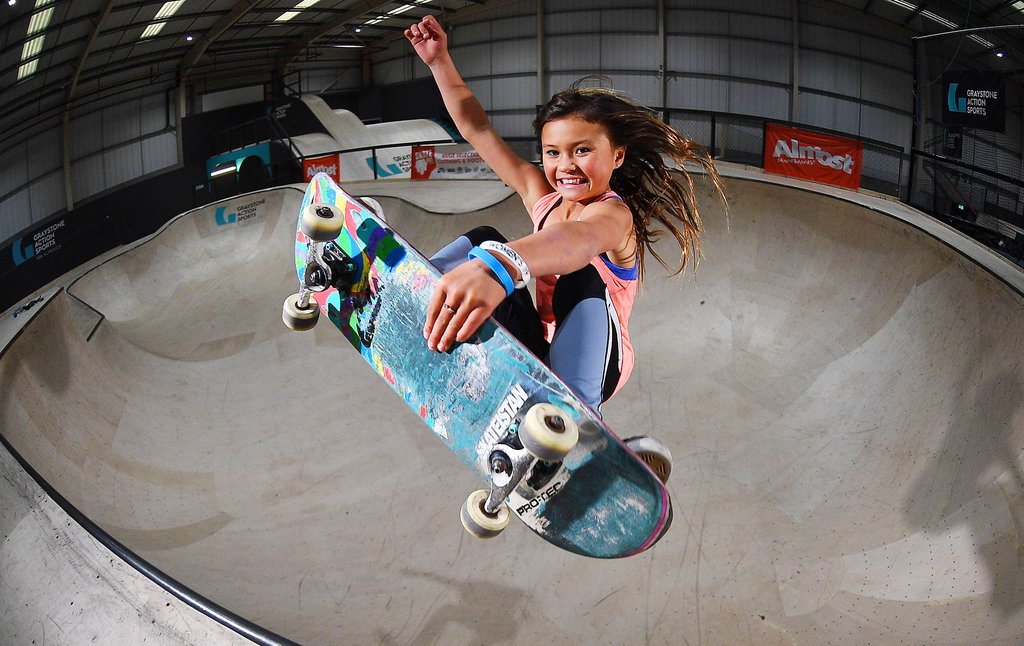 This 12-year-old skateboarding prodigy (who turns 13 on July 12) is Britain’s youngest summer Olympian in history. “A lot of people are going to watch it and I get to show that if this little girl can do it, you can do it too,” she told the BBC in 2019, in-between practicing her two passions — skateboarding and surfing.

Brown suffered a terrible fall in spring 2020, fracturing her skull and breaking bones in her hand, but she was determined to heal and come back stronger than ever. “This will not stop me,” she said on Instagram. “I am going for gold in Tokyo 2021. I’m going to push boundaries for girls, with my skating and surfing.” She wasn’t lying. 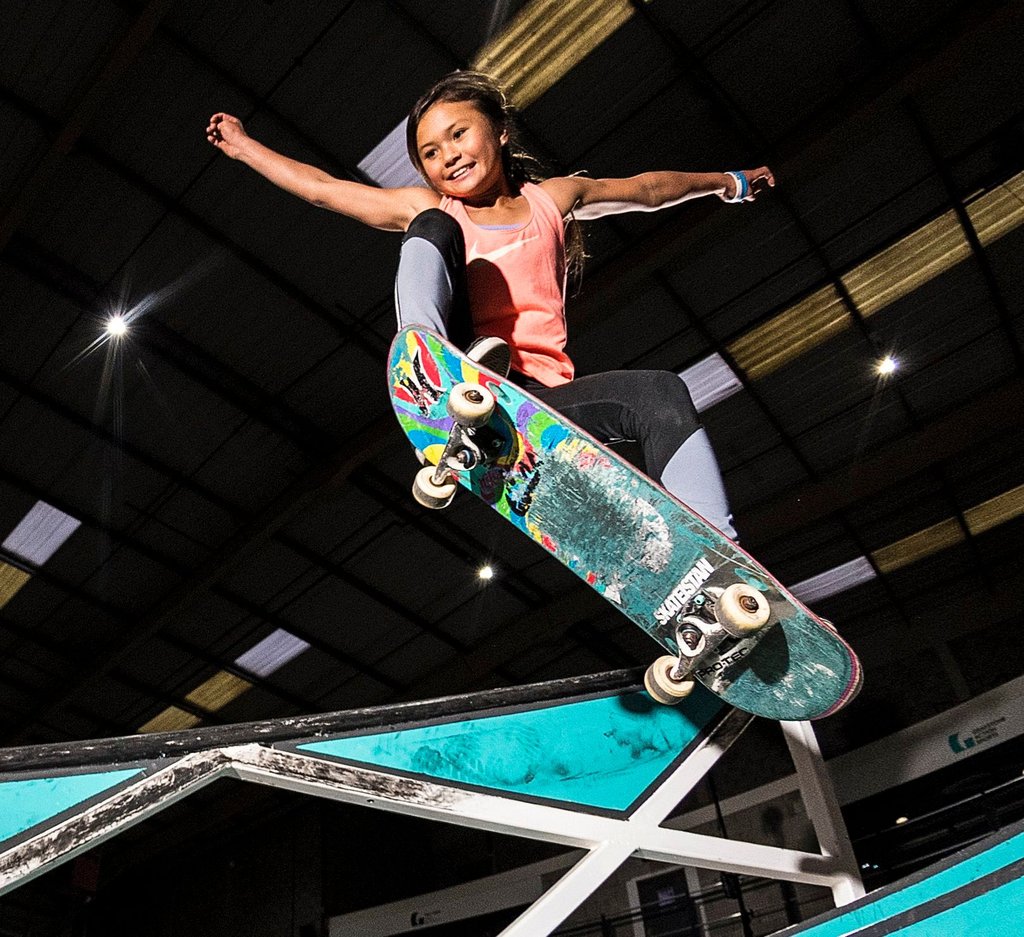 Allyson Felix finishes second during a semi-final in the women’s 200-meter run at the U.S. Olympic Track and Field Trials, in Eugene, Oregon. Image by Ashley Landis/AP/Shutterstock.

After the challenging birth of her daughter in 2018—one that required an emergency C-section at thirty-two weeks—Allyson Felix returns for her fifth Olympic Games (and her first as a mother). The competition will also be her last. 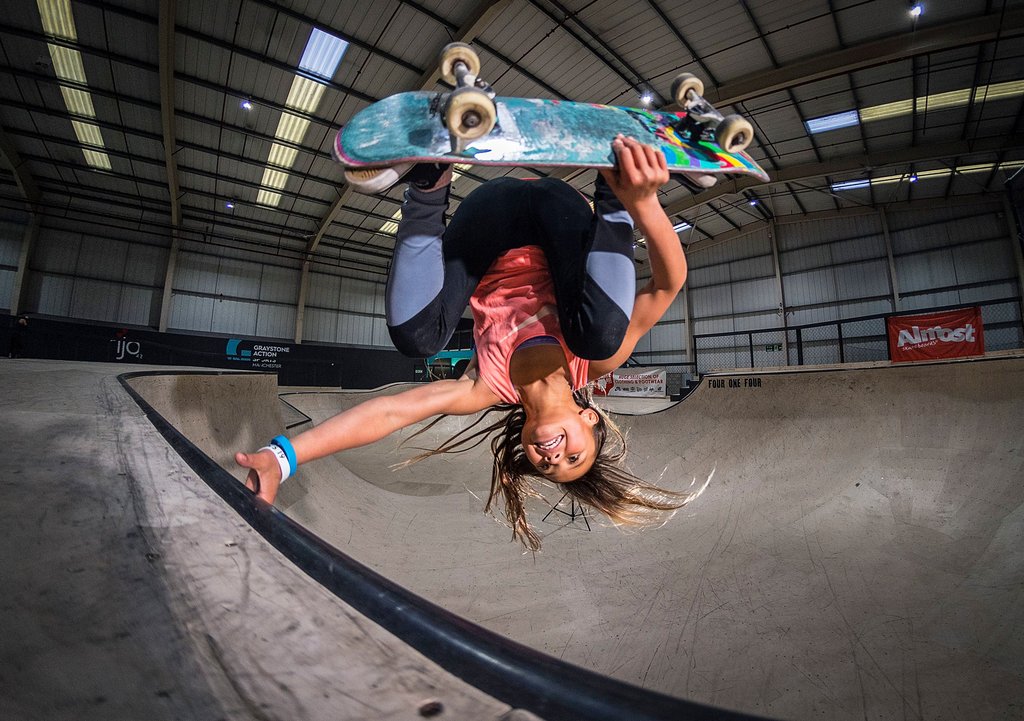 “I feel a mix of all emotions,” she said after qualifiying. “I’m real excited obviously to be going to Tokyo. There’s a part of me that’s sad because this has been my life for so long. This is my last time around. I feel sad for that, but also excited for what’s to come.” 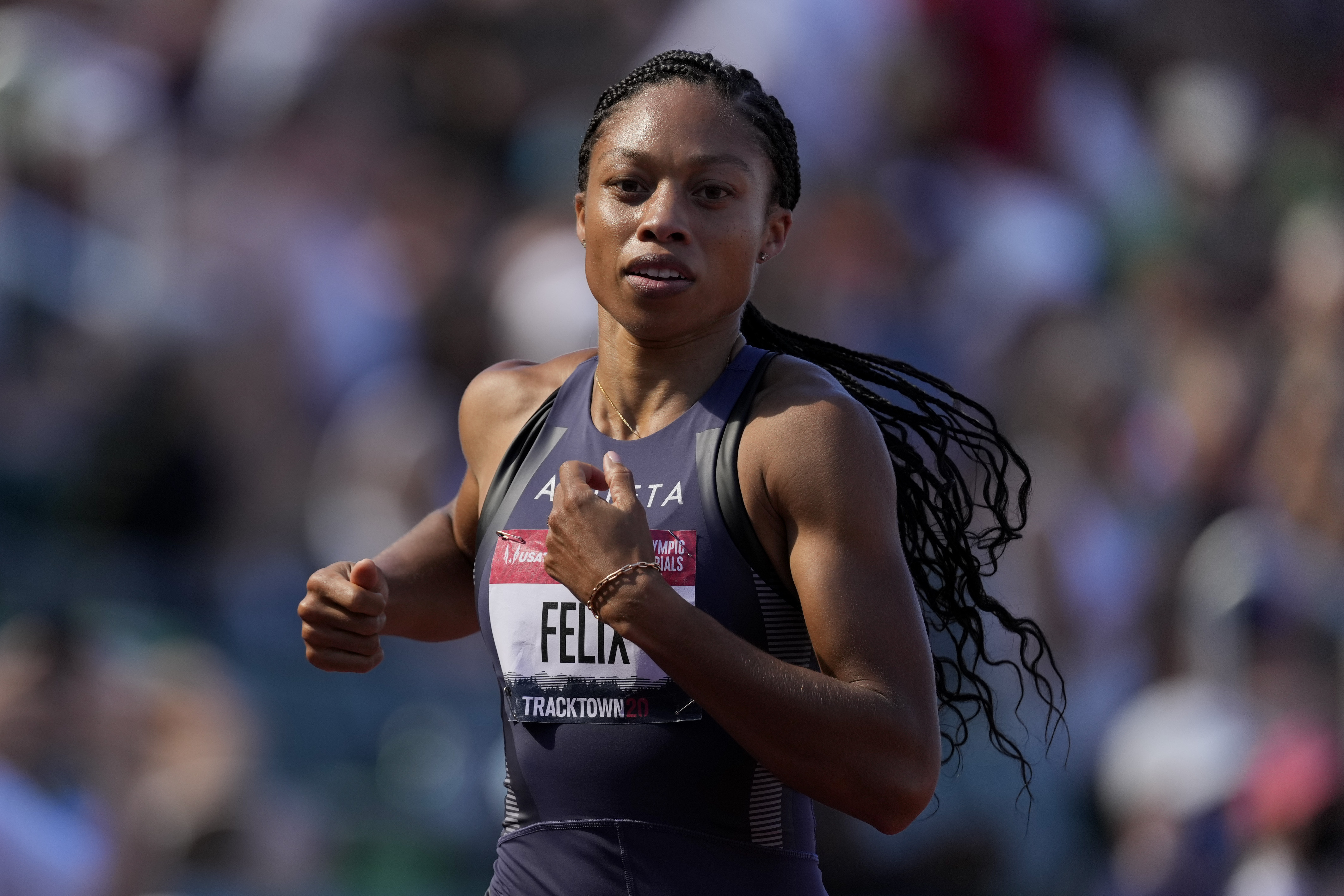 Allyson Felix celebrates after her second place finish in the women’s 400-meter run with her daughter Camryn at the U.S. Olympic Track and Field Trials, in Eugene, Oregon. Image by Ashley Landis/AP/Shutterstock.

Janja Garnbret competes in the women’s final at the International Federation of Sport Climbing World Championships in Tokyo. Image by Jae C Hong/​AP/​Shutterstock.

This Slovenian sport climber has dominated the sport for the last few years, making headlines in 2019 for winning all six bouldering events at the World Cup. Given that it’s her sport’s Olympic debut this year, she’s expected to make history once again. 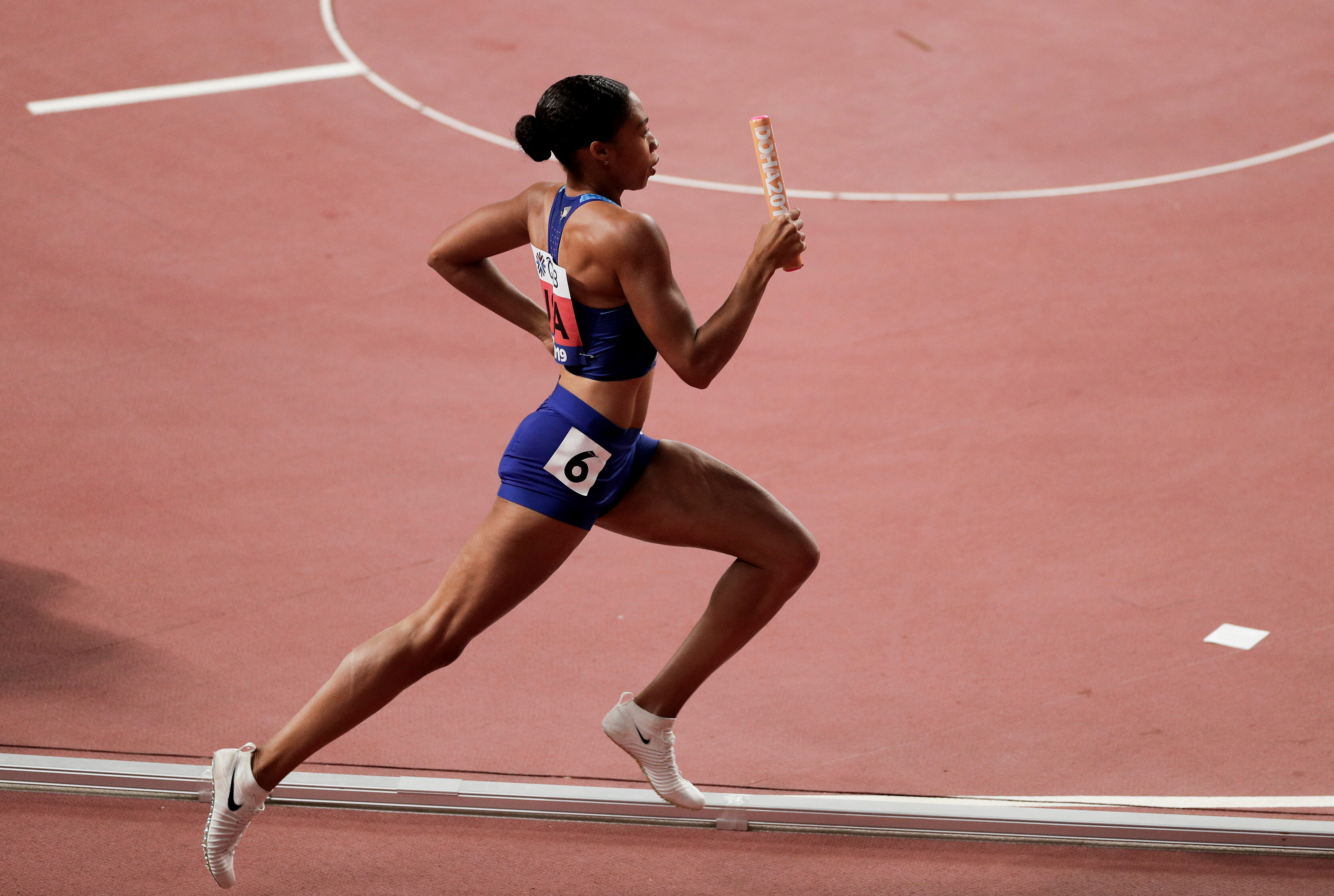 Even before becoming a global phenomenon, Garnbret had a passion for climbing. As a child, she climbed everything from trees to cabinets. As her goals reach new heights, she remains focused and devoted to the sport. “I climb because climbing is a moment where I fall in love with life,” she said recently. “When I am on the wall, nothing else matters.” 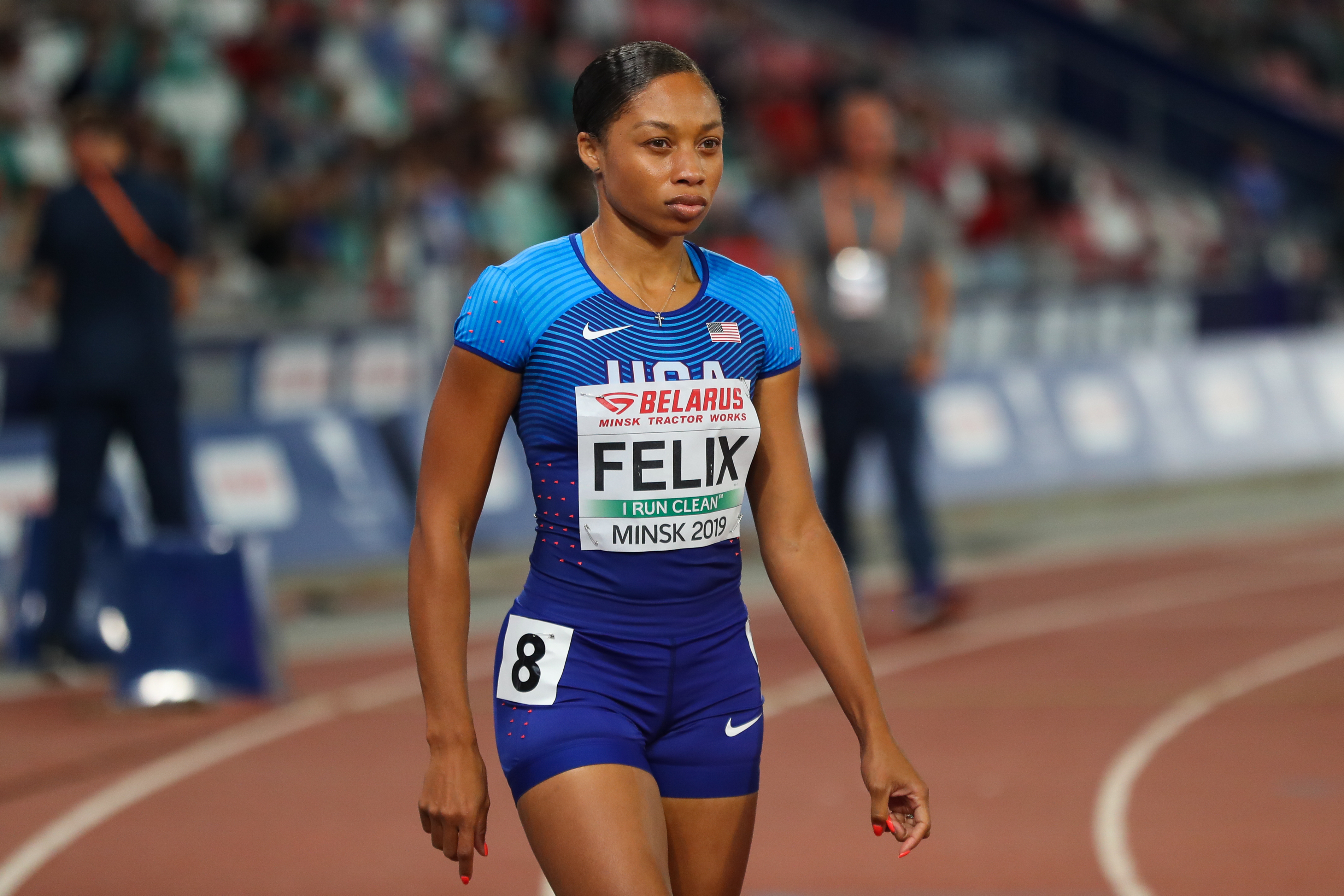 Naomi Osaka celebrates victory after her women’s singles second round match at the 2020 Australian Open. Image by James Gourley/​BPI/​Shutterstock.

This tennis champion will play for Japan, where she was born. “I think there’s no other place that I’d rather play my first Olympics,” Osaka told NHK in October.

Naomi Osaka playing for the Spain vs. Japan Fed Cup at the La Manga Club, in Cartagena, Spain. Image by AFP7/​Shutterstock.

She may have withdrawn from the French Open in May and passed on playing Wimbledon this year, but this tennis super star will make it to the Olympics.

“Honestly, it would mean a lot to me to bring home a gold to japan,” osaka told businessinsider.com. “I think it would take some time to fully sink in, but to be able to win a gold on the soil of my country, knowing that the younger generation is watching, it excites me to know that I have the opportunity to inspire and inspire an entire generation. a whole proud country.” 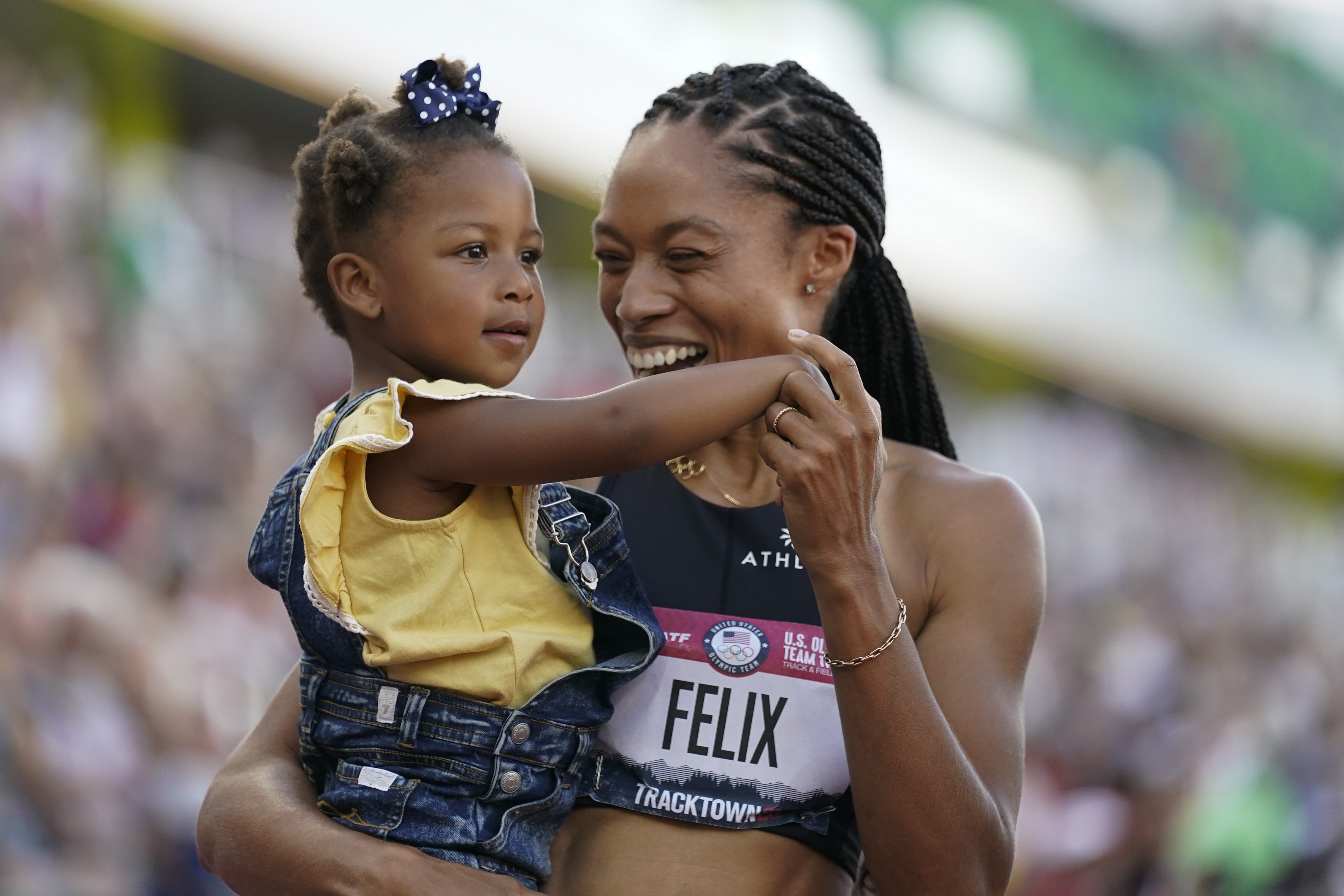 Naomi Osaka reacts as she plays against Petra Kvitova, of the Czech Republic, during their WTA Finals Tennis Tournament in Shenzhen, China’s Guangdong province. Image by Andy Wong/​AP/​Shutterstock.

Known for his patterned socks, love of painting, and the “ICON” tattoo across his rib cage, this sprinter has his sights set on the 100m, 200m, and 4x100m titles. With an open space left by the recently retired Usain Bolt, Lyles has stepped up to become one of the biggest names in the sport, not only because of his breathtaking speed but also because of his fun-loving personality. 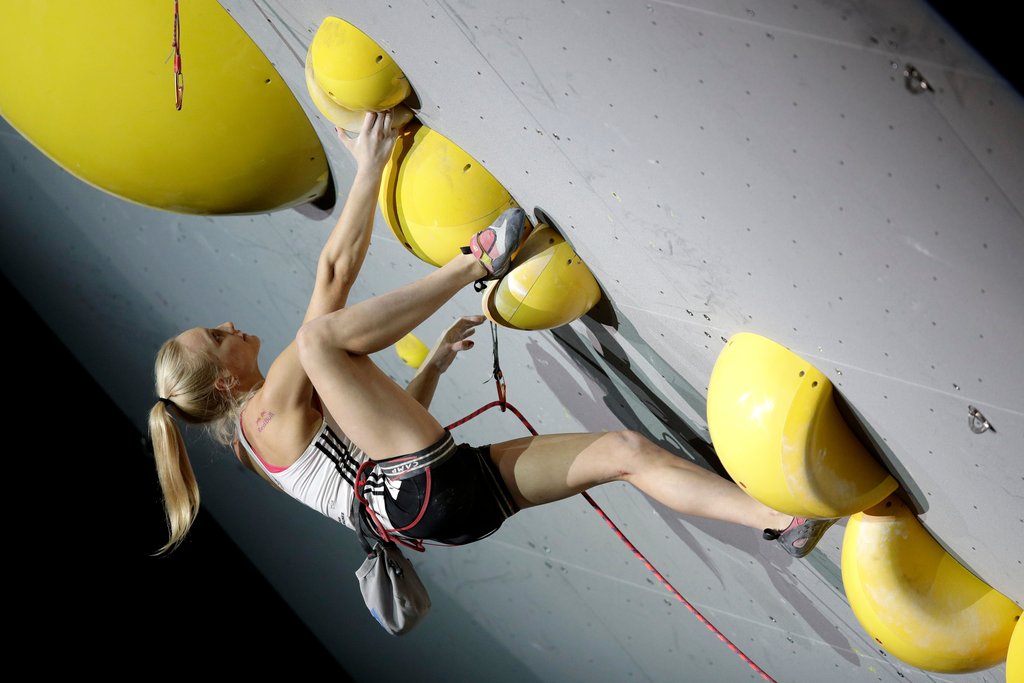 Noah Lyles is on his way to win the men’s 200m final at the IAAF World Athletics Championships 2019, at the Khalifa Stadium in Doha, Qatar. Image by VALDRIN XHEMAJ/​EPA-EFE/​Shutterstock.

“Too many people get caught up in not having fun when they run,” he told The Washington Post last year. For him, it’s that sense of joy that lies at the heart of the sport, and he’s never forgotten it. Watching him in Tokyo will be worth it for the athletics, but also for the performance and energy he brings to the field. 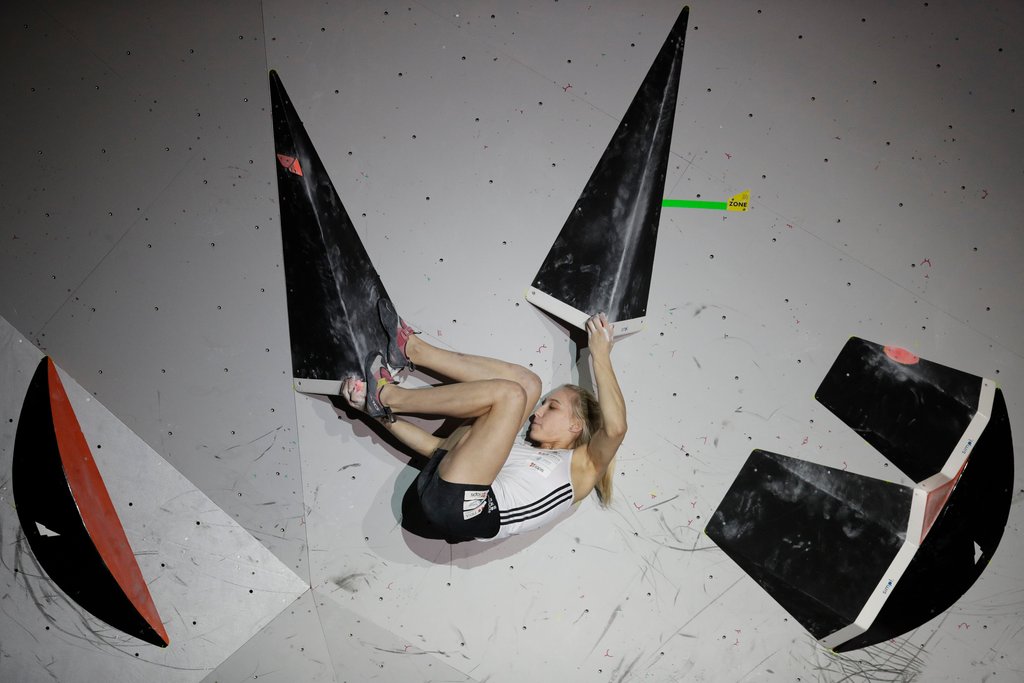 Nyjah Huston in action during the “street” category of the World Skateboarding Championships at the Anhembi Parl, in Sao Paulo, Brazil. Image by Sebastiao Moreira/​EPA-EFE/​Shutterstock.

This American street-skater, who happens to be the highest paid skater in the world, is set to make his sport’s Olympic debut one for the ages. He’s excited for skating to finally get its turn on the world’s stage, especially since it’s an accessible sport beloved by so many kids around the world. 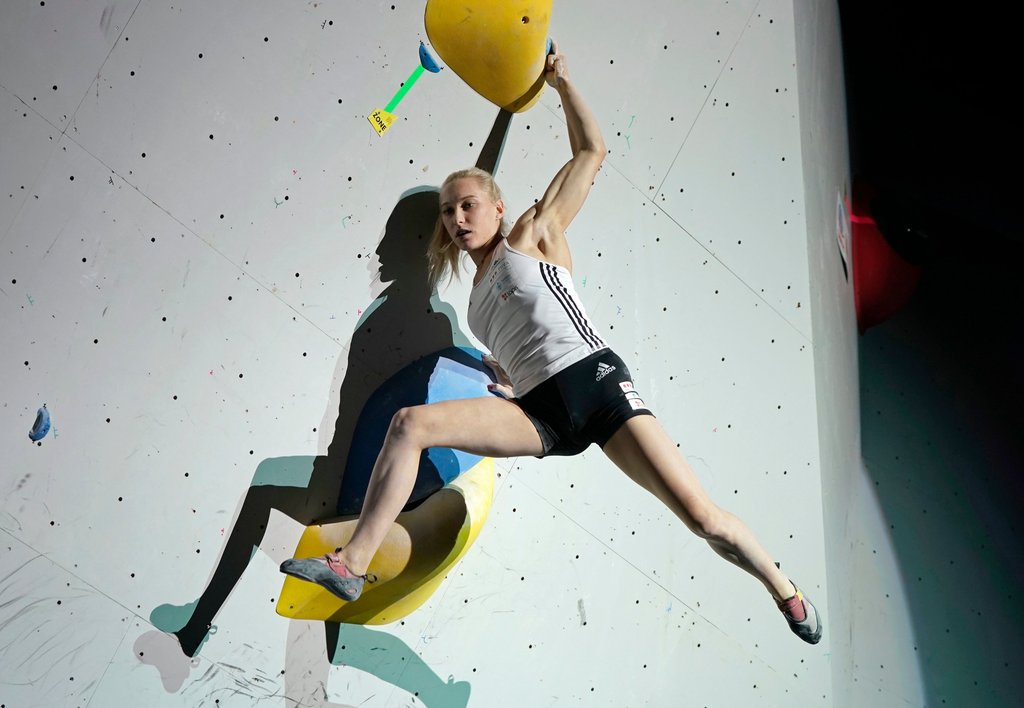 Nyjah Huston, the highest paid skateboarder in the world, performs alongside Leticia Bufoni BRA Professional street skateboarder, for an exhibition in the Urban Park. Image by Simon Bruty /​Shutterstock.

“Every day I’m inside, I swear I’m thinking about getting to Tokyo in 2021 and putting on those Team USA Nike jerseys,” he wrote for The Players’ Tribune last year. “I hope that we do right by our fans, by the people who helped get the sport to this point. And, I also hope there’s a little boy or girl watching at the park, or on TV, when the time comes.”

This gold medalist (2012 and 2016) and ten-time world champion discovered judo at age five. Riner was immediately drawn to the spirit and beauty of the sport. Now, his eyes are set on bringing home his third Olympic heavyweight judo gold medal, something no one has done before. 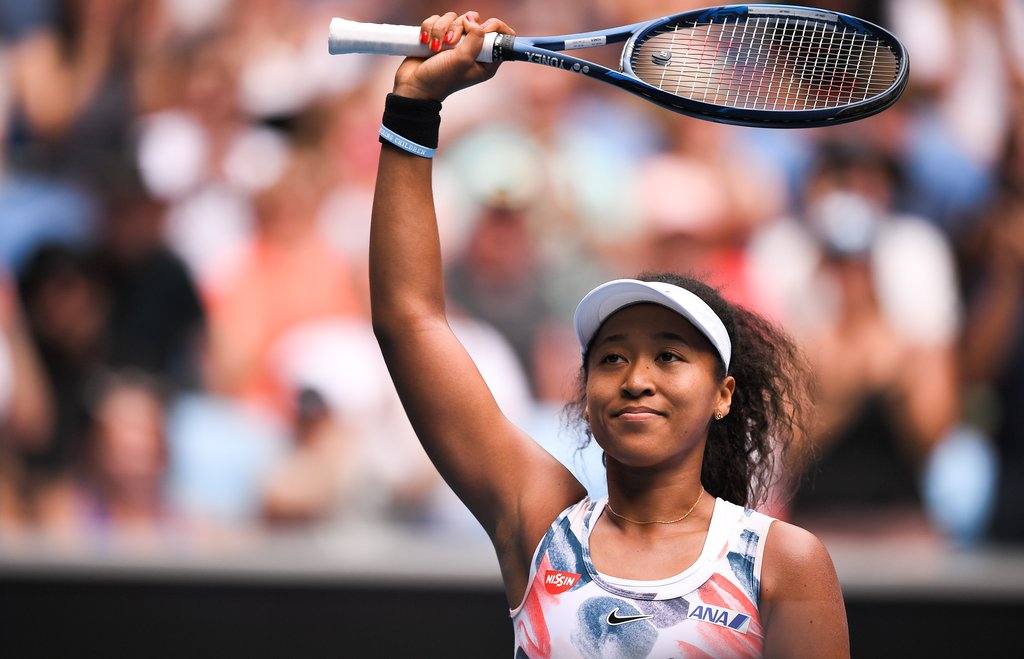 Teddy Riner (right) in action with Richard Sipocz of Hungary (left) during the +100 kg Men’s Round 1, during the Paris Grand Slam judo tournament, in Paris. Image by CHRISTOPHE PETIT TESSON/​EPA-EFE/​Shutterstock.

Riner’s lost his first match in ten years last year, following 154 consecutive victories, which means he’s just about as close to invincible as you can get — and Tokyo marks an important moment in both the history of the sport and his career.

“I remember that when I was younger, I came here to face the best judokas,” he told the Olympic channel in 2019. “Today I am among the best and I know that I am a marked man and that other judokas want to take my place” .

This seven-time world champion surfer will make Olympic history in Tokyo, something she’s dreamed of since watching the Australian sprinter Cathy Freeman take home the gold in 2000. “I knew when I fell in love with surfing, at 12, I wouldn’t have a chance at the Olympics, which kind of crushed me,” she told Rolling Stone Australia last year. “But it’s finally happening.” 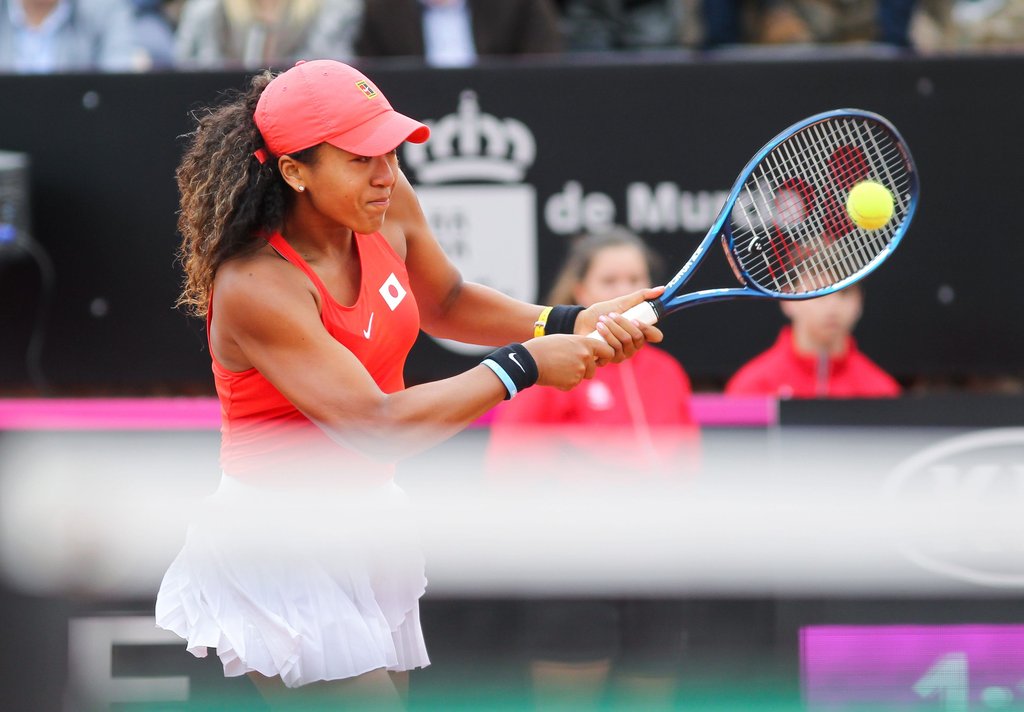 Stephanie Gilmore in action during the women’s finals of the Corona Bali Protected surfing event, as part of the 2019 World Surf League in Keramas, Bali, Indonesia. Image by MADE NAGI/​EPA-EFE/​Shutterstock.

As a feminist and advocate for women in sports, Gilmore has helped bring about a sea of change in pay equality within surfing, making her an inspiration to generations of young athletes. When she hits the beaches in Chiba, she’ll have her eye on the gold. “I don’t wear too much jewelry, but that’d be a nice necklace to have,” she told POPSUGAR this winter. 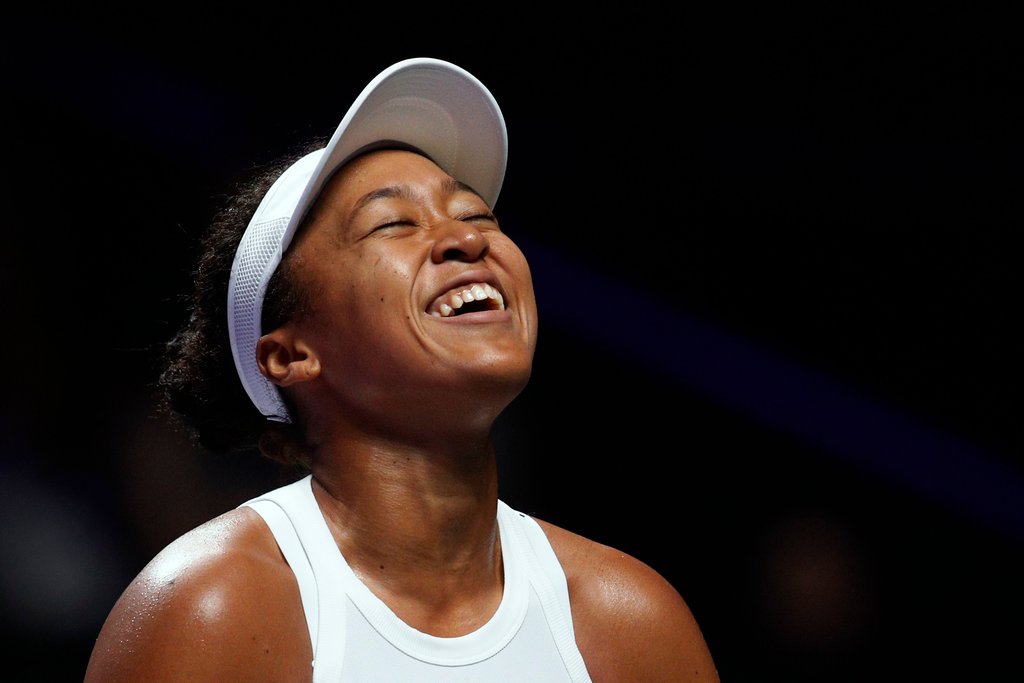 Eliud Kipchoge is hugged by his wife Grace Sugutt after he breaks the historic two hour barrier for a marathon. Image by Jed Leicester for The INEOS 1:59 Challenge/​Shutterstock.

In 2019, this Kenyan runner became the first man to run a sub-two hour marathon in Vienna, stopping traffic at home in Nairobi and sparking celebrations around the world. In Tokyo, he’ll have the opportunity to defend his title. If he does, he’ll be the third person in history to win the Olympic marathon twice.

Eliud Kipchoge (center) poses with his gold medal on the podium after winning the men’s marathon race of the Rio 2016 Olympic Games Athletics Track and Field Events, at the Sambodromo in Rio De Janeiro, Brazil. Image by Sergei Ilnitsky/​EPA/​Shutterstock.

Kipchoge recently spoke about the healing power of sports, especially in the midst of a global pandemic. “Marathons are like life, we have flat courses, downhill, and hilly courses,” he said. “Now we are on a hilly course, this is the hardest of times. And like in a marathon, that’s when you are struggling to go up the hill.” 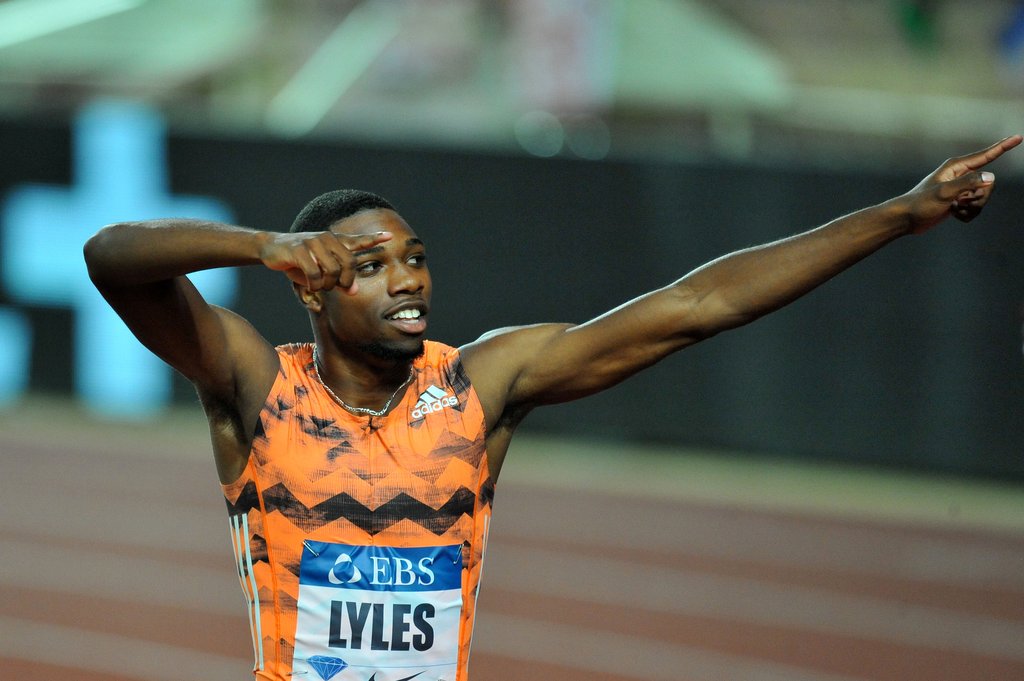 Discover more celebrity news and sports history with these photo tours through the shutterstock archives.